The overall humanitarian situation remains dire in north-west Syria (NWS), with the population reaching approximately 4.4 million people as of June 2022. Humanitarian needs continue to be driven by the impacts of over a decade of hostilities exacerbated by economic deterioration and multiple displacements.

More than 2.8 million are Internally Displaced People (IDPs), many of whom are living in over-crowded locations with limited access to essential services. As of June 2022, 1.8 million IDPs were living in 1,434 camps or informal sites. Women and children represent 79 per cent of this caseload while more than 73,000 IDPs are reported to be persons with specific needs.

The 2nd quarter of 2022 had a high focus on contributions to the 1st standard allocation of the Syria Cross-Border Humanitarian Fund (SCHF) as well as contingency planning and continued discussion about lessons learnt from the winter response.

With winter approaching again in the 4th quarter there is a critical need to ensure adequate preparation, funding, and response. Winters are now exacerbated by climate change and last for 4 months rather than 3. There is the increased risk of a ‘cold snap’ such as the severe snows experienced last year and extensive flooding the year before. With around 800,000 people living in old tents (61% of which are more than 2 years old) winter needs are acute. With the UNSC resolution expiring in the middle of winter, it is critical that this year’s winterisation programs are adequately funded and implemented well in advance of the UNSC 10 January deadline.

During the 2nd quarter the SNFI Cluster Team was fully involved in the 1st SCHF Standard Allocation for 2022. The priorities and targets in line with the updated cluster strategy set were recommended as objectives in the SCHF Allocation strategy paper: Better dignified shelters with associated infrastructure; Replacement of old torn tents with better dignified shelters in planned camps; Piloting of innovative approaches to shelter; and winter assistance for the next winter 2022-23. SNFI focussed on ensuring integration with ERL cluster to enhance the resilience in and out of IDP sites.

The final agreed upon strategy with the SCHF team prioritized the following activities:

The final approval and transfer of budgets for the approved project was delayed until the beginning of July (Q3) as this was highly dependent on the outcome of the UNSCR.

With the ongoing process of UNSC resolution renewal (including the latest renewal which is for a shorter-than-usual period of 6 months), SNFI is continually engaged in contingency planning processes. Most of these are OCHA-led and relate to a) coordination services, b) ability to respond to humanitarian displacement if there is a non-renewal, c) ability to respond to further conflict-induced displacement in the event of a expansion of hostilities or military action inside NW Syria. Through its partners, the SNFI Cluster maintains a small contingency stock of relief supplies however this is concerning low at the moment.

SNFI has also been involved in the development and response to different scenarios, led by INSO. These look at four possible implications of a non-renewal: a) no change to the current response arrangements, minimal change with modest disruption, transition to NGO-led response, and a worst-case chaotic breakdown of the response. SNFI has contributed to the formulation of a response to these scenarios and continues to advocate for a continuation of longer-term shelter programming as well the maintenance of adequate funding levels for the response.

The 2nd quarter was crucial for the follow-up discussion on the implemented winter response during 2021 and 2022. The cluster conducted the annual After-Action Review meeting in which the biggest stakeholders and contributors to the response shared their post distribution monitoring findings and discussed required changes in the guidance document, the approach and timing in general. This meeting was followed by a dedicated discussion that was held in collaboration with the Cash-Working Group on the recommended ‘winter labelled cash’-value. The outcome of the Winter AAR and the Cash Value discussion where all consolidated and prepared for an update of the cluster’s winterization guidance note during the upcoming third quarter to support the planning and coordination of the next winter response 2022 and 2023.

SNFI Cluster members continue to actively respond to the needs of the newly displaced population as well as protracted IDPs in NWS. At the end of the 2nd quarter of 2022, 519,000 individuals received NFI assistance in the form of NFI kits, kitchen sets, mattresses, jerry cans, carpets, solar lamps, tarpaulin, and blankets. In addition, 700,000 people were reached with seasonal/supplementary NFI distributions.

Shelter needs of approximately 587,000 people were addressed during the reporting period. As part of a complementarity approach, some sites and IDPs benefited from more than one SNFI activity. Of this shelter support, 44% was related to the provision of emergency shelter, 51% to the rehabilitation of infrastructure in IDP sites, 5% to shelter rehabilitation and transitional shelters.

The Cluster continues to focus on strengthening gender equality both in programming, and in the Cluster itself. The cluster’s Gender Focal Point continues to work with the cluster coordination team and all cluster partners to strengthen engagement on Gender, disability, AAP, and inclusion. 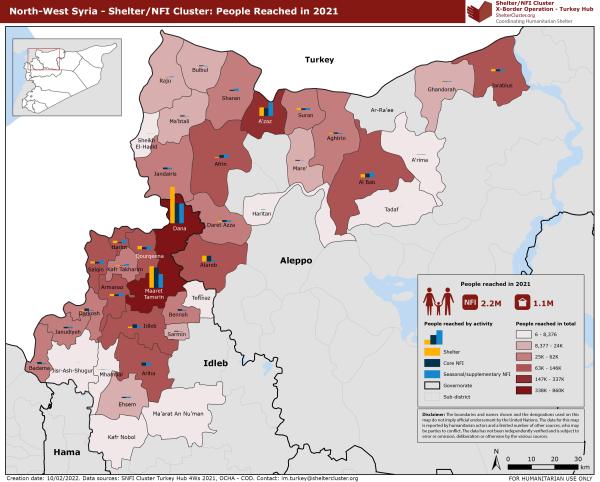