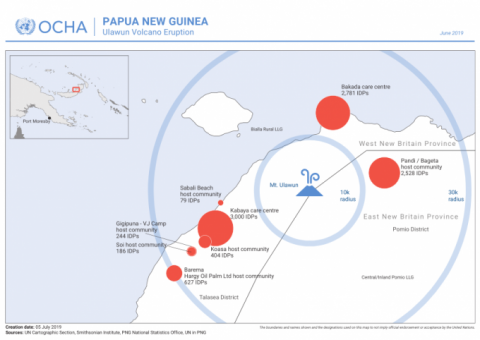 On 26 June, the Ulawun volcano, about 130 km (81 miles) southwest of the township of Rabaul, East New Britain province, on the island of New Britain, started emitting ash plumes. Ash plumes have risen to 50,000ft, and the Aviation Colour Code has been raised to Red. Mount Ulawun in West New Britain Province (New Britain island) erupted magmatic gas, ash and lava flows on 25 June at 22.00 UTC after increased activity in recent weeks. Between 3,000 and 5,000 people voluntarily evacuated the immediate vicinity of Ulawun, according to the National Disaster Centre. While no casualties have been reported so far, all communities within a 20 kilometres radius of the volcano were instructed to relocate to designated safe zones. Over 10,000 people were evacuated to 10 care center sites in West New Britain and 427 persons sheltered in one care center in East New Britain.