1. Since end of last year, displacements of population have increased significantly, reaching the ﬁgure of 1,407,685 internally displaced people by the 30th of September 2021 (31% increase).

3. New population movements show a slight increase of IDP in both the Cascades with 89% increase of new registered IDP, and the Est region with 82% increase since the beginning of the year. 99% of the movements are intra regional.

5. Out of the new coming emergency alerts, Shelter cluster partners have made notable interventions to assist the displaced households within various host areas, however, important response gaps still exist in order to cover all the affected households in need.

In addition to the usual concerns in these situations of precarious housing and high levels of overcrowding, the risks linked to the transmission of COVID-19 are compounded in a country with a fairly degraded health system. The housing conditions and lack of essential household items of the vast majority of people affected by the crisis do not allow for adequate monitoring of preventive measures such as physical distancing and increased hand hygiene in the present. Moreover, over the 70% of the affected population are not in adequate conditions for self-isolation in cases of COVID (MSNA 2020, Reach Initiative).

After the mentioned strong impact of the rainy season on the most vulnerable population shelter conditions, Burkina Faso Shelter Cluster (BF SC)partners have made the common effort to perform a technical revision of the shelter solutions ongoing in country. Added the technical colleagues support, the BF SC regional focal points performed a community consultation in the 5 regions more affected by the crises and gathered their opinions on the different typologies of current shelter solutions. This exercise exposed to the BF SC the need to shift from highly temporary shelter solutions towards more durable and resistant solutions and nourished the programming of the 2021 shelter response.

Shelter and NFi activities conducted with the modality of cash transfer are increasing within the BF SC. Taking into account the specificities of the shelter projects and the lack of experience on this modality of some partners, the SAG agreed on the need to develop an operational guideline within the BF SC with the intention, for the contextualisation of this modality to the sector and the country particularities. It has been recently finished and shared.

Main gaps in the shelter response in Burkina Faso are identified as follows:

- Access to enough, adequate and legally secure land for the shelter response.

- Consideration of the host community in the flood response along with the displaced community. Still the support in terms of shelter and NFI given to the most vulnerable host population is quite behind the target agreed.

- Mobilization of funding for shelter and NFI response at the scale of the population's needs.

- Geographical coverage, due to current limited presence of shelter cluster partners in all affected areas. 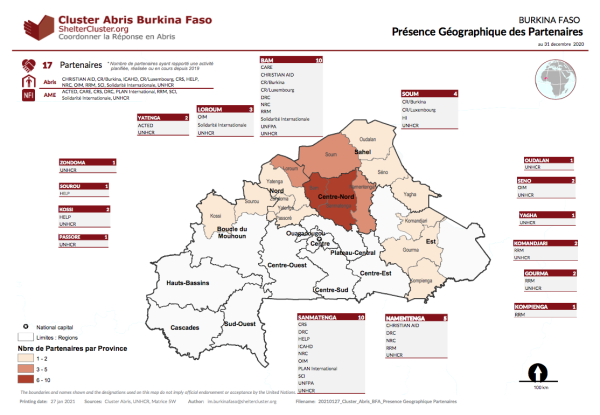