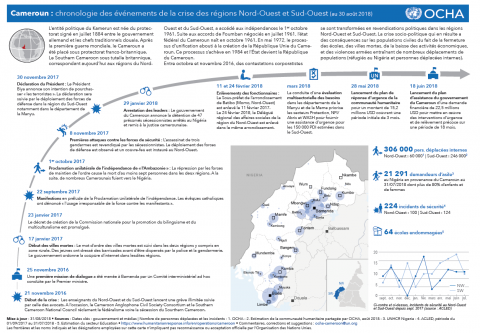 On the 17th of October 2018, the Shelter Cluster was activated for the South-West and North-West regions of Cameroon to support the response to the recent crisis. The cluster is led by UNHCR.

Since 2016, political and social instability has had a negative impact on the civilian population of Cameroon’s South-West and North-West Regions, hosting four million inhabitants (16% of the total population). Since November 2017, the escalation of tension and upsurge in hostilities between non-state armed groups and defence and security forces have triggered humanitarian needs across the two regions, linked to significant internal displacement. In May 2018, the humanitarian community launched an Emergency Response Plan (fr, summary in en) for the North-West and South-West regions of Cameroon requesting 15.2 million USD with 160,000 persons targeted. Shelter and NFIs was identified as the key sectoral priority after food, and followed by health, WASH, education, food, and protection. Initially eighty percent of the displaced population found refuge in rural areas often in congested locations or in the bush, they left everything behind when they fled. In June 2018, the Government of Cameroon launched a 2018-2019 Emergency Humanitarian Response Plan, separately to the humanitarian community’s ERP.

Local partners are at the forefront of the response, but the provision of shelter has been challenging. Local partners have flagged repeatedly that shelter needs are critical and need to be prioritized. More capacity and scaling-up of the response is needed. As of mid-August 2018, following an exercise with local partners, the estimate of IDPs in the South-West region only was revised upwards to 246’000. To date based on the evolution of the crisis, there are 351,000 IDPs in the South-West and the North-West regions.

The situation is very fluid: There are multiple displacements, and the population is quite dispersed in the bush in rural areas, while in urban areas, IDPs are living in overcrowded and cramped conditions with host families or renting. All groups have acute shelter needs, but the modalities of response should be appropriate to each.

This crisis is taking place against a backdrop of several other humanitarian emergencies affecting 3.3 million people across Cameroon. The Humanitarian Response Plan 2017-2020 (en, fr), launched in January 2018, is a multi-year plan in order to create better synergies with the UNDAF coordination arrangements also being implemented in the country. The HRP targets the needs of IDPs, host communities, refugees, returnees, and other populations impacted in Cameroon’s extreme north and eastern regions. The Refugee Coordination Model has been the primary coordination mechanism in those regions, with UNHCR leading the Shelter/NFI Working Group in country.