Skip to main content
In region Mozambique and in group Mozambique

After cyclone Idai’s second landfall in Mozambique on March 15th  2019, an estimated total of 660,000 people (approx. 132K HHs) across Sofala, Manica and Zambesia provinces had lost their house and livelihood and were in urgent need of emergency shelter assistance. Although some 445k (approx. 90k HH) people were reached with shelter assistance by July, an estimated total of 560,0000 people (approximately 112,000 HH in provinces affected by Idai) were still in urgent need of shelter assistance and unable to self-recover, mostly in rural areas, where the majority of families who relied on subsistence agriculture, have lost their livelihoods and main source of food, and facing competing priorities. This includes additional caseloads areas that were not assessed initially. The overall number of people in need of shelter assistance after cyclone Idai, amounts to around 1M (approximately 200K HHs).

In January and February 2020, new floods & heavy rains affected over 70K people in the central region provinces of Manica, Sofala and Zambezia. Agencies used all their stocks and supplies to provide minimum response to approximately 4K people leaving still a large gap from the new flood/heavy rains and cyclone Idai of approximately 300K people.

Since the beginning of the response (March 2019) until the end of February 2020, Shelter Cluster partners have provided shelter support to  750K people (approximately 150K HHs) and NFI support to 180K (approximately 37K HHs) in the provinces of Sofala, Manica and Zambezia.

Cluster partners across the affected areas in Sofala, Manica and Zambézia provinces lack resources to address the wider shelter needs with a current gap of 250K people (approximately 50K HHs) that still need to be reached. 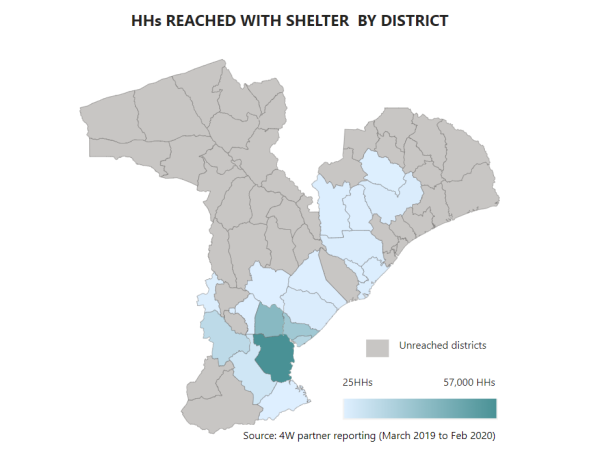