The S/NFI updated its prioritisation in May and partners agreed on several criteria to guide this exercise, which include: 1/ type of emergency, 2/ duration of displacement, 3/ sub-standard shelter conditions including IDP's hosting in collective centres and open-air sites and 4/% of vulnerable HH at sites. A total of 261,830 HH are in need of urgent shelter and NFI assistance. Despite the number of households reached in the second quarter (28,666), the overall caseload increased in the second quarter. The humanitarian situation in Ethiopia has deteriorated due to three major crisis:

1. The floods hit mostly Somali region and displaced some 30,000 households

2. A rapid and renewed violence in West Guji and Gedeo, one of the most densely populated in the country, had led to the displacement of some 100,000 households.

A cash feasibility assessment was conducted in May 2018 covering three woredas in Somali region to ascertain if cash response is feasible in the covered area. The assessment was conducted by NDRMC, CWG, and the Cluster. The assessment focused on the f food and non-food items supply chain. In addition, a new cash transfer value for NFI's was reviewed following market assessments and changes. This was done to support and encourage partners to use cash response where contexually appropriate.

Another priority this year is to move into a more substantial shelter response and alternative assistance options. As such, some of the partners has built transitional shelters to improve the IDP's living conditions in Dire Dawa and Deder Woreda In Oromia.

A continous shortage of raw materials in the country impacted the procurement of ES/NFI kits and caused delays in the distribution. In addition to it, on-going security issues, especially in Moyale and Hudet made the delivery of kits coming from Kenya complicated and at times impossible. The lack of access to some of the IDP sites in conflict and flooded areas prevent timely needs assessment and response.

In terms of funding requirement for 2018, the cluster has covered only 25 per cent of its need and is facing a severe funding gap. Beside the on-going conflict at the Oromia-Somali border, the escalation of the the conflict in West-Guji/Gedeo (Oromia/Somali), as well as the new flooding put additional pressure on the cluster's response capacity and made the prioritisation of areas a complicated exercise. At the end of June, the Cluster managed to mobilise addtional ressources for the conflict in West Guji-Gedeo conflict. In July and August, a substantial part of the need will be covered in this region. However, the percentage of households still unassisted in other parts of Ethiopia will remain high. 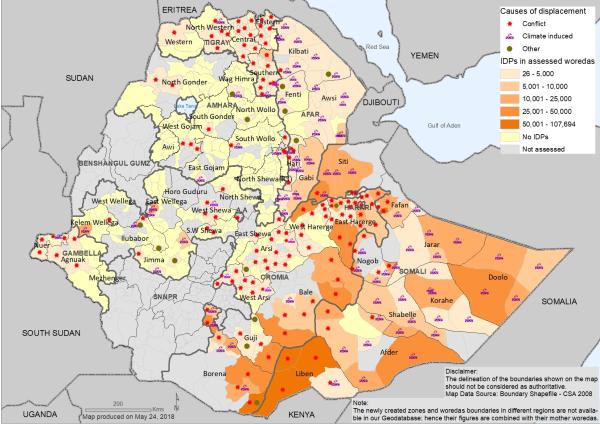