The Gedeo-West Guji crisis continues to dominate efforts by partners within the ESNFI Cluster, as the return plan initiated in August 2018 has had very uneven results, with many returnees still in collective centres and unable to return to their villages of origin due to security concerns; and large numbers having also gone back to the places to which they had initially been displaced. It has been very difficult to determine exact numbers of those in need, given that the government of Gedeo zone is refusing to have those who have come back after return to West Guji registered; and figures from many local governments in West Guji zone are considered highly distorted.

Levels of displacement on the Somali-Oromia border remain undiminished, and in several areas, IDP populations are critically in need of distributions, made more difficult due to both exacerbated insecurity and wet season conditions.

Between July 2018 and Septmber 2018, the cluster has reached a total of 77,693 households in Gambella, Oromia, Somali, SNNPR, Dire Dawa and Amhara with full S/NFI kits (24,558), cash grants/vouchers (17,929), partial S/NFI kits (10,302) and Split Kits (24,904). Conflict affected IDP’s in the West Guji and Gedeo zone received around 90 per cent of this overall support. The cluster has organized capacity building activities to support Pillar 1 prevention and mitigation) and Pillar 3 (national systems strengthening and recovering) interventions of the newly launched HDRP, including a flood mitigation technical workshop and a technical training on durable shelter solutions. One of this year’s priorities is to encourage the partners to look at different assistance options that provide better protection, health and opportunities to the displaced people in the long-term. A Cluster Retreat held on 28th and 29th November to launch preparation of ESNFI contribution to the 2019 HDRP, and a longer-term Shelter Plan for Ethiopia. This has highlighted areas under Pillars 1 and 3 where the Cluster is already building capacity and preparing for greater focus, including Housing, Land and Property (HLP) rights; logistics systems; and development of locally-appropriate shelter models and standards.

In terms of funding requirements for 2018, the cluster has covered only 22% of the needs and is facing a severe funding gap. In addition, displacements reported at the end of September/beginning of October in Oromia Region (West Guji), SNNPR (Gedeo), Benishangul Gumuz due to conflict will put additional pressure on the cluster’s response capacity. A new prioritization exercise will be conducted in July to take into consideration these changes, as well as the new DTM round 11 analyses. Beyond the funding limitations, the lack of access to some IDP sites in conflict areas prevents timely needs assessments and responses. 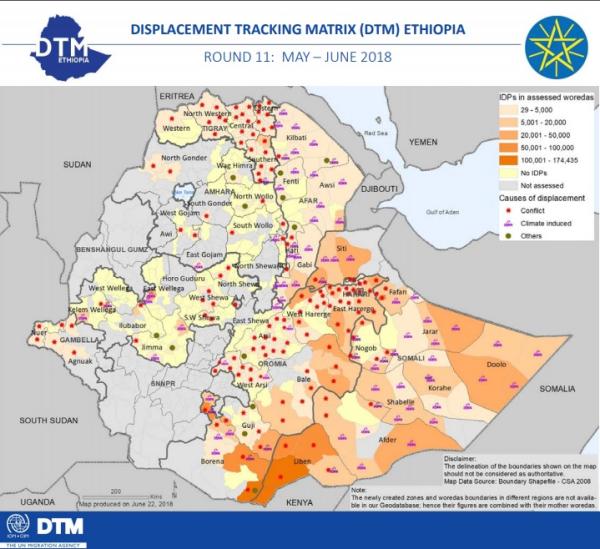