The first week of November saw a military confrontation between the Federal Government and the Regional Government of Tigray. Most of the region remains inaccessible with limited phone communications making verification of the needs very challenging. The Cluster has and will continue to advocate with the government in providing access for shelter partners to address the growing critical needs in the sector. The Amhara region has reported over thirteen thousand households displaced from the Tigray region. Similarly, around twenty-two thousand newly IDPs are moved to Afar. Restrictions on movement into Tigray Region and limited communications have made it difficult to verify the humanitarian situation. MIRA and partners assessments indicate that the ESNFI is the most critical need of the affected population next to food. According to the interim government, 2.2 million people require are in urgent need of an ESNFI kit. &#13;
&#13;
The conflict in Tigray has added to a growing caseload from flooding at the end of quarter three and the beginging of quarter four and additional displacement from conflicts, most recently in Benishangul-Gumuz and Konso special zone. The security situation in Metekel Zone of Benishangul Gumuz Region (BGR) has been gradually deteriorating since 2019, and more intensely in recent months. The two attacks in December and January accentuated, even more, the displacement of people in the area. The majority of the IDPs are displaced from rural areas to towns, while some fled to the neighboring Amhara Region (Chagni town and Guangua woreda of Awi Zone). The IDPs are sheltered in public spaces, including schools and meeting halls, while others have set up temporary make-shift shelters; some stay with relatives and others are out in the open. The last update from OCHA reports 121.000 displaced people and 28,000 returnees in the following woredas: Bullen, Dangur, Dibate, Guba, Mandura, and Wombera woredas.

The Shelter/NFI Cluster targeted 2.0 million IDPs, returnees, affected host communities, deportees, and migrants, emphasizing child- and female-headed households, the elderly, separated children, and people with disabilities and households at higher risk of illness. The second round of EHF has been finalized with an allocation of 1.25 million for the shelter response. The response has been split 75% for IDPs and 25% for returnees with coverages in Somali, Benishangul Gumuz, and Oromia regions with the amount per region/zones proportional to the number of the IDPs and Returnees.&#13;
&#13;
In the fourth quarter of 2020, the Cluster has progressively assisted 115,332 vulnerable displacements affected population, inclusive of IDPs and returnees across Afar, Amhara, Benishangul Gumuz, Gambela, Oromia, Somali, and SNNP regions. Component of response includes ENSFI in-kind, ESNFI in-cash, and mixed ESNFI (60,510), partial ES/NFI kits (38,623) and (16,200) with shelter reconstruction and repair (Repair kit full, partial and mixed, minor shelter repairs kit, Cash for rent/Shelter) support. With this, the shelter &amp; NFI cluster has achieved 57% of its target for the 2020 Response plan.&#13;
&#13;
Although access to Tirgary is restricted, shelter partners with an existing presence managed to respond in the region. The Cluster has set up two reporting hubs for the northern response in Mekelle and Gondar. Mekelle Hub will cover the North-Western, Central, East, and Southern Zones. Activities in Western Tigray and the border areas with the Amhara Region will be coordinated through Gondar.

Insufficient funding remains one of the key constraints. The Cluster only receives 32.6% of the total HRP cluster requirement of $101.1m. It urgently needs 33.7million to reach 670,000 IDPs living in congested condition, flood and conflict-affected communities, and recently returned IDPs. The flood during the kiremt season, together with ongoing displacements, has depleted all the Clusters prepositioned stock. The Cluster will continue to advocate for additional funding to replenish stocks and address the growing need for Shelter assistance throughout the country. This will include the recent displacements in Benishangul-Gumuz and Konso special zone, in which there is no stock in the pipeline or funding.&#13;
&#13;
Limited access to the Tigray Region has made it difficult to get an accurate overview of the needs; however, the initial reports indicate a critical need across the region. The Cluster will continue to advocate for unimpeded access to the region to conduct assessments and allow partners to respond. Further to this, the Cluster will advocate for the restoration of banking services to give the Cluster and partners the option for a CASH based response. 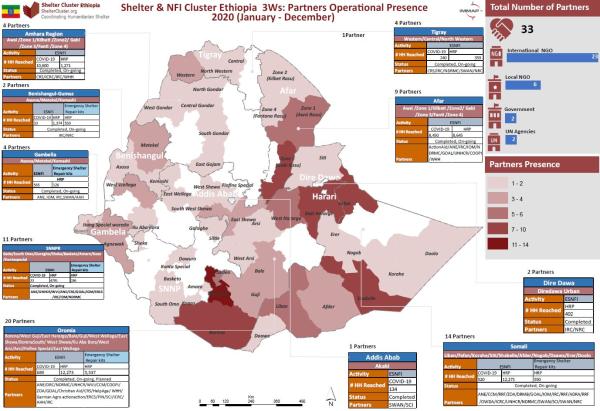