At the start of the year 2021, the Cluster had targeted 2.8 million people However, following the influx of IDPs in March and April in the Tigray region, and the spillover of the Northern Ethiopia war to Amhara and Afar regions by the fourth quarter of the year,  the Cluster increased its target to 3.8 million people. Of the targeted population 63 % are from Tigray. As a result, in the last 12 months, Cluster partners reached 1,944,851 IDPs, returnees, and affected communities in Afar, Amhara, Benishangul Oromia, Somali, SNNP, and Tigray regions.  With completed, ongoing and planned activity, the Cluster will reach 80% of its target.

The last quarter of 2021 experienced a significant deterioration of the Tigray Region's security situation. This affected the response to the millions of IDPs displaced due to the conflict that had started in November 2020. In addition, worsening tensions around the regional borders and within the region has resulted in new displacements in multiple phases from Western Tigray, Amhara and Afar regions, along with from the woredas bordering Eritrea. Over 50,000 IDPs have been reported to be newly displaced and currently living across different zones, with Northwestern Zone having the highest IDP population. The majority of the newly displaced population are yet to receive humanitarian assistance, including shelter and NFI. On the other hand, voluntary returns of IDPs to their areas of origin have started in Mekelle, highlighting the need for shelter assistance in return to woredas to repair damaged houses. With schools being reopened in most woredas, shelter solutions for IDPs from Western Zone remain a high priority. &#13;
According to the local authorities, since the spillover of the conflict into the Amhara region, 2.1 million people were internally displaced in the region. While the Cluster had targeted 1.2 million IDPs for Emergency Shelter and NFI assistance, the government has returned a significant number of IDPs to their place of origin since the cessation of hostilities in many parts of Amhara Region. Precipitously change of context and spontaneous movement of returnees is creating additional burdens to the stretched cluster capacity.&#13;
In Afar, the recent fighting in Chifra and Abala led to multiple displacements of IDPs. Some of these weredas have faced a recurring conflict since November 2020, generating secondary or multiple displacements. Furthermore, culturally as the communities are pastoralist, the population movement has been fluid and challenging for the responses. Meanwhile, uncoordinated returns are reported in most displacement-affected locations. In the past month, two collective sites were opened in Semera. These IDPs are from Abala and live without shelter and with limited NFIs whilst some are living in highly congested situations.&#13;
In East/West/Kelem Wellega and Guji zones, Oromia Region, and in some weredas in Benishangul Region, conflicts induced displacement continued. However, accessing the IDPs remains a challenge in addition to the limited funding.&#13;
&#13;
&#13;
The conflict in other regions of the country has continued in East and West Wellega, Metekel zone in Benishangul Gumuz and Konso Zone in SNNPR through this quarter. In Metekel Zone access has become increasingly difficult with increased activities of UAGs and targeting of humanitarian vehicles. In Metekal zone they are estimated to be 206,076 IDPs with many more seeking refuge in neighboring Awi Zone of Amhara Region. In Awi Zone one communal site has been setup with an estimated 21,714 IDPS with many more opting to shelter in the host community.&#13;
&#13;

In Tigray, in addition to the lack of fuel, cash, construction materials, and resources resulting from the de-facto blockade, additional constraints were faced by all Cluster partners with the temporary suspension of UN flights, the only means of cash flow into the region. This had led to an all-time low response in November after the initiation of the blockade. Although the pace had picked up slightly after the resumption of UNHAS flights, the main challenges remain the same for implementing any meaningful response by partners. With extremely limited resources on the ground, the Emergency Shelter/NFI needs of the newly displaced IDPs remain largely unmet. This is in addition to the already existing gaps of the rest of the IDP population. Furthermore, the shelter and household items needs of the returning IDPs have also emerged as a high priority in light of the ongoing voluntary returns to safe woredas. &#13;
In Amhara and Afar regions, despite the improvement of access and security, the response remains optimal due to the limited cluster resources.&#13;
Rapidly depleting stocks of ESNFIs and difficulties related to the provision of cash for NFIs leave many IDPs without essential household items. The consequences of the shortage of essential services such as communication channels, cash, and associated unprecedented price inflations, low fuel stocks, etc., have reduced the Cluster partners' capacity to 65%. Operations may come to a complete halt if humanitarian access is not facilitated. &#13;
&#13; 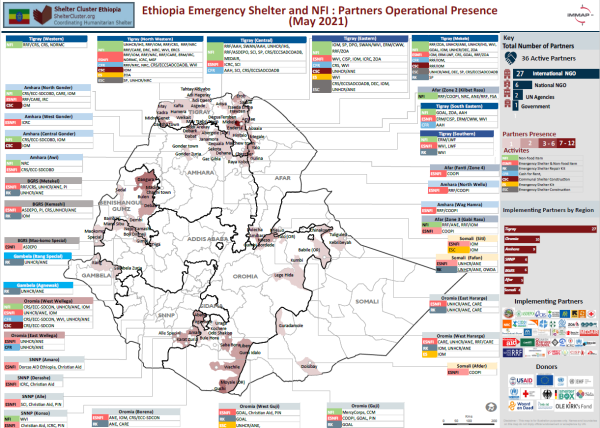