The second quarter has been mainly characterized by displacements and returns due to conflict in Northern Ethiopia and both conflict and drought in the rest of Ethiopia. Kirmt season also brought flood-related displacement in some parts of the country. In Tigray, Cluster partners made use of the window of the opened Abala route to Mekelle to allow entry of stocks to support 224K individuals and fuel amounting to 16K liters. Amhara Region experienced displacements mainly in North Wello, Wag Hamra, North Shewa, and South Wello Zones. Following the restoration of peace and access in the Afar Region, most of the IDPs in Zone 2 have returned to their place of origin; according to the regional government, close to 300K people were displaced at the start of 2022. Inter-communal conflicts and conflicts between unknown armed groups and government forces have also resulted in displacements in North-Western and Southern Oromia, Benishangul, and SNNP regions. Multiple displacements have also affected communities from Oromia and SNNP regions as they attempt to move back to their places of origin. Drought-induced displacements have been experienced in Afar, Oromia, SNNP, and Somali regions. The Cluster has been active in Afar, Amhara, Benishangul Gumuz, Oromia, , SNNP, Somali and Tigray regions, providing different emergency shelter and NFI support through partners.

The ongoing conflicts, recurrent drought, heavy rains, and flooding have continued to displace people in all the regions where the Cluster is active. Many collective sites across the regions remain congested, and some IDPs have to seek shelter in unfinished buildings, makeshift houses, warehouses, stadiums, and open areas. The IDPs’in the host communities living conditions have also been deteriorated by the exhaustion of resources due to the blockade in the Tigray region and the limited resources. Some of the IDPs opted to move to the already overcrowded collective centers. Following the heavy rainy season, the Tigray Amhara and Afar regions reported shelter damage, largely IDP sites. With improvements in the security situation in some parts of the Amhara, Afar, and Benishangul regions, many people have returned to their places of origin. However, with their houses either partially or entirely destroyed, and on the other hand, their household items either looted or destroyed, they urgently require shelter repair and NFI support. So far, the Cluster has only managed to reach 26% of its targeting, highlighting the need to scale up responses, although resources and access to some locations remain major challenges. Drought-affected IDPs in Somali, Oromia, SNNP, and Afar regions also require shelter and NFI assistance.

Since January 2022, the Cluster has managed to reach 1.2M people, which is 26% of the total Cluster target of 4.5M. There are also committed resources enough to reach 22% of the target, leaving the Cluster with a gap of 52%. The assistance was provided through the provision of ESNFI kits, ES kits, rental assistance, communal shelter, and shelter repair kits. 178K people have been reached in Tigray, which is 21% of the Cluster regional target of 1.3M. From the In Afar Region, of the total 660k target, the Cluster has reached 35% since January 2022. Moreover, 10% of the target will be reached through committed resources. A total of 347K IDPs, returnees and vulnerable host communities were assisted in Amhara Region. Partners completed 200 blocks (1,200 units) and 20 blocks (120 units) of communal shelters in Jara North Wello and Wolleh, Wag Hamra sites, respectively. 286K individuals were assisted in Oromia, SNNP, Benishangul Gumuz, and Somali regions, constituting 14% of the total target of 2.1M. Drought and flood response plans were also developed to respond to the displacements as a result of there natural hazards across the country.

Security and access challenges due to the ongoing conflict in most regions, such as Oromia and Benishangul, have slowed down implementation efforts by the Cluster. Positive developments in Tigay with the opening of the Abala route allowing aid to enter, including ESNFI items; however, limited cash and fuel continue to impact activities. Significant funding shortfall remains a major and outstanding challenge across all the regions. There are few humanitarian partners considering the enormous need for humanitarian assistance on the ground in the Oromia, SNNP and Benishangul Gumuz regions. Most displaced families have currently spread around in the host community in sub-standard rental homes with substantial hazards to protection and GBV. In Amhara Region, delay of installation camp facilities and other services in newly established sites and centers is adversely affecting the responses. 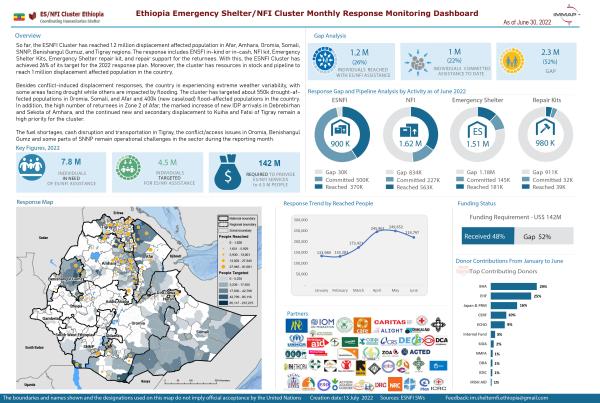