Displacements in the third quarter continued with an increase in the intensity of shocks in Ethiopia. Conflict resumed in Northern Ethiopia in late August, resulting in mass displacements in Afar, Amhara, and Tigray Regions. Although there is an urgent need to respond to these regions, most conflict-affected areas were inaccessible, and it has been difficult for partners to respond. Conflict and UAGs activities in Oromia and Benishangul regions also resulted in displacements with IDPs in need of ESNFI assistance. Returnees were also reported in Afar and Benishangul Gumz regions, although lack of resources limited the response activities. Relocations in Amhara and Tigray regions were also conducted in the first half of the quarter but had to be halted due to the resumption of conflict. Drought in southern and eastern Ethiopia resulted in displacements mainly in Somali and Oromia regions, although the response is limited due to a lack of resources. Floods and heavy rains caused displacement in Gambella, and Afar regions whilst emergency shelters were damaged in Tigray and Amhara Regions resulting in shelter repair and maintenance in the affected IDP sites.

An estimated 299,509 primary and secondary displacements affected people in  North-western, Southern, and Central Tigray populations who are reported living in open areas, host communities, and crowded buildings. They are in urgent need of emergency shelter and NFI assistance. Furthermore, people in displacement situations due to conflict in Somali, Oromia, Benishangul Gumz, and SNNP regions, with an estimated 1.1 million targeted for the four regions. In the Somali, Oromia, and Afar regions, 567K people had been targeted due to the recurrent drought situation, and more displacements continue to occur. There are 59K, and 185K people reported to be displaced by the floods in the third quarter in Afar and Gambella regions. Although the Cluster has managed to respond well in the provision of ESNFI and NFI kits, there still is a considerable gap in Emergency Shelter and Shelter repair kits assistance of 1 million and 223K, respectively.

The Cluster has responded to 2.2 million displacement-affected populations since January 2022. This constitutes 53% of the Cluster revised target of 4.1 million. With resources meant for 914K people committed, Cluster remains with 988K (24%) people yet to be reached. The assistance has been through the provision of 900K ESNFI kits, 1 million NFI kits, 264K emergency shelter assistance, and 62K shelter repair kits. From the Drought Response Plan, an extract of the 2022 Humanitarian Response Plan, the Cluster targeted 567K people, of which 73K (13%) displacement affected population has been reached. 34K flood-affected people were also reached in Afar, Gambella, and SNNP regions by the third quarter.

The renewal of conflict in Northern Ethiopia has increased the displacement in Afar, Amhara, and Tigray, adding to the already overgrowing needs in the Cluster. There is a considerable gap in response to Emergency Shelter (72%) and shelter repair kits (66%) assistance. In Tigray, the pipeline of resources meant for the region will soon break once what is in stock is distributed. Due to the worsened situation, the road blockade and other restrictions have resulted in fuel shortage and cash and consequently affected partners' response activities in the Tigray region. Difficulty in tracking IDPs who are displaced and livening in scattered situation in hard-to-reach locations. The lack of access by partners to the Tigray Region has negatively impacted the response in the region, leaving the displacement-affected population in a critical situation. Access constraints have also affected other regions due to conflict activities. In Amhara Region, the lack of viable land for the relocation of IDPs, and the delay in the installation of camp facilities in the newly proposed relocation site has also affected the relocation activities for the IDPs in dire need of shelter. Low funding, particularly for Emergency Shelter and for recurring displacements such as Tigray, Oromia, Benishangul Gumz and Somali regions, is also one of the main challenges. 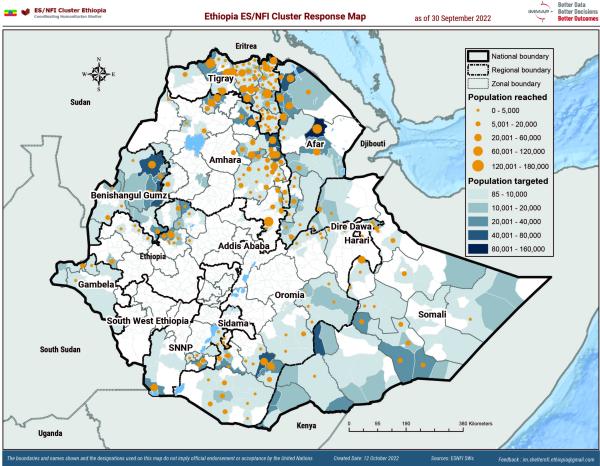