Collectively, the sector continues to provide life-saving and sustaining assistance in flexible and targeted approach. As of December 2017, around 7.5 million people were reached with at least one NFI. Of this figure, around 2.2 million people were considered adequately served with both core and supplementary items. Through inter-agency convoy around 766,000 (34%) of the 2.2 million people served were located in hard-to-reach communities and around 51,000 people (2%) in besieged communities. Along with the provision of regular NFI support, seasonal support continues too. In 2017, around 1.2 million people who were mostly located in Aleppo, Homs, and Rural Damascus governorates were served with basic winter support. &#13; 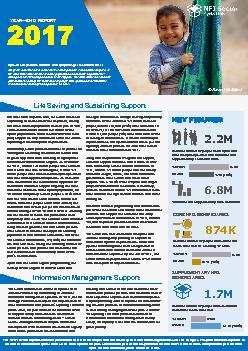