This form is an invitation to think about the specificities of groups of people that may be identified as having a different background, characteristics, situation, or history in a given context. The groups may include: refugees, displaced populations, returnees, minority ethnic groups, religious minorities, specific vulnerable groups (e.g. socially marginalised because of caste system, sexual orientation, repudiated persons, extremely poor persons…), etc.
This form has a first common part with general questions that can be suitable for all the eventual focus groups. This part would be the basis for the interview of as many focus groups as there may be in a given place. Then, there are subsections with specific questions referring to particular groups. As an example of specific questions, we present two questionnaires for two focus groups that may be present in conflict zones or after a disaster. One of the questionnaires is for displaced households and/or refugees and the other one is for returnee households.
Vulnerable Households are defined according to the NRA’s (National Reconstruction Authority of Nepal) vulnerable list, based on four criteria: i. Single women who have completed the age of 65 years; ii. Senior citizens who have completed the age of 70 years; iii. Orphaned children under the age of 16 years; and iv. Persons with disability who have obtained the disability identity card (already covered in Form 3). 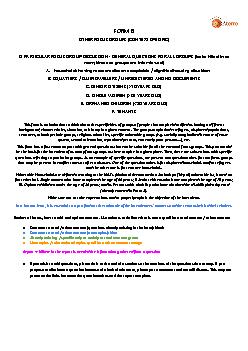