The situation inside Ukraine is dire despite some return movements reported (SitRep, June, OCHA). Currently, 6.2 million people remain displaced by war within the country (UNHCR SitRep 1st of July). Many people are unable to meet basic needs including, food, shelter, water and medicine, especially due to access constraints in areas where intense shelling is still on-going. According to
IOM DTM round 16, Kyivska, Dnipropetrovska and Lvivska oblasts have the highest number of displaced each hosting over 180,000 IDPs. Dniprovskyi, Poltavskyi, Vinnytskyi, Bilotserkivskyi and Khmelnytskyi raions have reported the largest populations of IDPs, with over 65,000 per raion. IDPs' most frequent oblasts of origin have been Donetska, Kharkivska , Luhanska and Kyivska.
In total, 42% of the assessed settlements by REACH (Round 13), reported damage to infrastructure or housing. The settlements with the highest level of damages of most types of infrastructure were Mariupol, Volnovakha, Volodymyrivka (Donetskaoblast),Polohy, Vasylivka(Zaporizka), Izium, KozachaLopan (Kharkivska), Kreminna, Shchastia(Luhanska), Vysokopillia (Khersonsa)

According to the Cabinet of Ministers Donetsk, Kharkiv and Kyiv oblasts have the biggest number of damaged individual houses. More than 200,000 people have already registered their damaged and destroyed properties via the online platform Dia. The Cabinet of Ministers allocates funds for operational rehabilitation; however, these funds are not enough to rebuild the completely destroyed housing.

Another huge concern for the affected population is the damages to functional utilities. Lack of electricity and gas were reported in 59% cases of assessed settlements constant in Donetska, Luhanskaand Kharkivskaoblast. Furthermore, in 71% of the assessed settlements, access to non-food items (NFIs) was also reported as a grave concern, especially for Donetskawith 86% and Khersonska 83%. In terms of housing, 42 % of the assessed IDP hosting settlements in NGCA, key informants (KIs) reported that rental apartments were ‘easy’ to find. This was particularly the case in NGCA settlements in Khersonska and Donetska oblasts. Further data of REACH depicted that 61% of assessed IDP-hosting settlements in NGCA, the majority of IDPs lived with friends and family. The situation is different in Velyki Prokhody (Kharkivskaoblast), where displaced people reported not having any housing options.

The Ukrainian Government’s hosting families support program was launched on 19 March with the aim to provide shelter support to internally displaced persons countrywide. The program offers an immediate alternative to collective centers, similar to many neighbouring countries that host
refugees. The program has been presented to the SC partners and there are already three partners who are supporting the program: NRC; UNHCR and Red Cross. 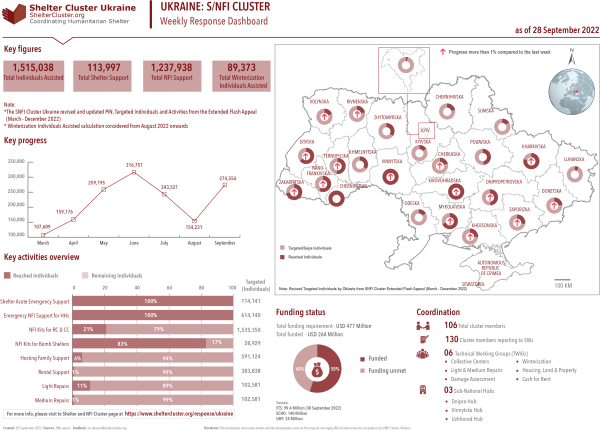