Title
Winterization Recommendations 2019-2020
Publisher
yurii.arnautov
Date
Type
Document Type
Technical Support and Design
Non Food Items
Filename
winterization_recommendations_19-20_final_merged.pdf
Source
Shelter Cluster
Response
Ukraine
Language
English
Tags
Advisory NoteNon Food ItemsTechnical GuidanceWinterizationClothing and BeddingGeneral Household SupportStoves, Fuel, and Lighting
Description
After almost five years of humanitarian response to the crisis in eastern Ukraine, the conflict - never completely frozen - still affects the lives of thousands of internally displaced persons (IDPs), returnees, non-displaced people and hosting communities.
In the first half of 2019, the conflict caused new damages to more than 400 houses on both sides of the line of contact (LoC). This confirmed the decreasing trend in new damages already registered the year before, but also showed that the civilian population and infrastructure remain a target.
Since the start of the crisis, the housing repair efforts of local authorities, communities and humanitarian agencies have resulted in a clear reduction of the number of families in need of shelter assistance, especially in government-controlled areas (GCA). At this point of the response, shelter agencies are preparing to hand over the sectoral responsibility to state agencies, limiting their focus on filling gaps where state agencies cannot reach (e.g. areas with difficult access, limited basic services and insecure locations along the LoC or not sufficiently covered by humanitarian assistance (non-government-controlled areas [NGCA]).
A similar approach needs to be applied to the winterization response. It should be recognized that almost five years of crisis have prevented the majority of conflict-affected people from recovering their livelihoods, and that more people have by now exhausted their financial savings and are not able to prepare adequately for the coming winter. At the same time, humanitarian agencies need to approach their winterization programmes as actions complementary to the assistance provided by state agencies in GCA and de-facto authorities in NGCA. The Shelter/NFI Cluster remains available to facilitate communications between government and non-government actors, since now more than ever closer co-ordination is required.
Assistance to Collective Centres and other social institutions should also be considered a priority, even outside the 0-20 km zone (away from the LoC).
Projects that pilot sustainable alternative winterization actions - highly recommended in the previous winterization guidelines - remain a direction that Cluster partners are still invited to explore, but bearing in mind relevant plans and programmes of recovery and development agencies.
All information included in the present document results from consultations with the main Cluster partners, in both GCA and NGCA, who contributed in the updating of last year’s Recommendations - on which this document is largely based - building on the experience developed in the previous five winterization cycles. 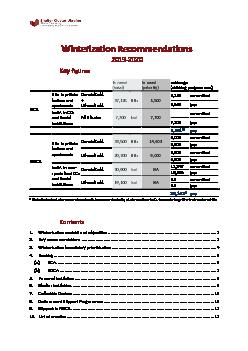