Over 2.7 million IDPs are living in north-west Syria, bringing the total population to more than four million.

As reported by HNAP, in December 2020, a total of 27,562 IDP movements were recorded, marking a minor 2 percent increase from the previous month of November. Idleb and Aleppo governorates were both the top origin and arrival governorates for the newly displaced IDPs, with the majority displaced from Idleb (56 percent) and the highest percentage displaced to Aleppo (49 percent). Unlike recent rounds, Lattakia governorate also received about 3 percent of recently displaced persons. The most common drivers of displacement were the lack of access to basic services (up to 50 percent from 15 percent during the previous reporting period), deterioration of the economy (21 percent) and worsening security situation (15 percent), while the highest proportion of new IDPs were pulled to their current place of displacement in order to access humanitarian services (31 percent). Access to livelihood opportunities was the highest priority need for the majority of IDPs (63 percent). Only 43 percent of recently displaced persons are currently residing in adequate shelter (down from 70 percent of November IDPs), while the highest proportion (48 percent) reported living in emergency shelters, like tents.

Shelter/Non-Food Item (SNFI) Cluster members continue to actively respond to the needs of the newly displaced population as well as protracted IDPs in north-west Syria. More than 3 million individuals*, both IDPs and host community members, were assisted with NFI and/or shelter from January to December 2020. This figures may include potential overlaps despite all the efforts of the IM unit in order to avoid double counting based on activities reporting of cluster members.

Throughout the year, 2,668,484 individuals received NFI assistance, including core and essential, as well as seasonal or supplementary NFI distributions. Due to the recommended targeting of most vulnerable households due to limited funding this figure could include potential overlap if the same households received the needed winter assistance in early 2020 and at the end of the year. Shelter needs of 932,403 people were addressed with activities including emergency shelter assistance, shelter rehabilitation and transitional shelters, and seasonal shelter assistance. More than 380,000 individuals have been reached with rehabilitation of infrastructure in IDP sites, which is excluded from the total figure of shelter assistance as the same beneficiaries were most likely targeted with emergency shelter assistance throughout the year, as the cluster recommended the combination of these activities.

SNFI continues to actively coordinate with the Health and WASH Clusters, as well as the Early Recovery Cluster and Cash Working Group, to respond to the needs of the IDP population in the context of the COVID-19 pandemic. Soap and fabric masks are recommended by SNFI to be included in NFI distributions, with the suggestion to procure items locally.  496,260 individuals have received additional soap with their NFI distributions since March 2020, when the Cluster shared this as a recommendation in coordination with the WASH and Health Clusters. The SNFI Cluster also updated its recommendations on COVID-19 in both English and Arabic.

SNFI continues to provide site planning support through coaching and trainings with the goal of building capacity and facilitating well-planned settlements in north-west Syria. The trainings have been in the form of weekly online sessions via zoom meeting with simultaneous Arabic interpretation. Training topics varied from terrain analysis to child protection in IDP sites, introduction to GIS, and site planning strategies to mitigate GBV. A specific Site Planning Page has been developed on the SNFI website, where various resources are compiled to provide additional support.

Following multiple reports of flood incidents in IDP sites in north-west Syria, SNFI has prepared Flood Classifications and Effects on IDP Sites in north-west Syria which were shared and published on the cluster website. This document examines different levels of floods, including the impact, damage and likelihood; and aims to provide possible flood response interventions accordingly. It also includes technical guidance on developing and planning drainage systems in IDP sites, as well as useful links for further tutorials.

In response to the regular fire incidents reported in IDP sites, SNFI has developed an awareness raising brochure focusing mainly on the safe usage of fuel and stoves during winter, targeting individuals and households.

SNFI aims to contribute to the most urgent life-saving winterization interventions, through the provision of timely winterization supplies as well as cash-based programming where possible. As part of the winterization response, SNFI Cluster members have reached approximately 897,766 individuals in from October to December 2020. The number of individuals targeted with secured funding (~42.8 million USD) is around 1.45 million. This number is not reflecting the overall needs, but is based on partner plans targeting the most vulnerable households in NWS.

The SNFI Cluster developed and published a Guidance Note on Shelter and NFI Kits for NWS. This document aims to provide detailed, technical guidance for cluster partners on shelter and NFI lifesaving activities. The guidance note comprehensively outlines the various items and their appropriate usage, as well as technical specifications, advice on quality control measures and prices. Details can be found on the emergency shelter kit and comprehensive shelter kit, minimum basic repairs and shelter winterization activities. In addition to information on the new arrival NFI kits, the document contains additionally sections on kitchen sets, and winter top-up items (for instance stoves and fuel, winter clothing, and other NFI winter items).

In collaboration with the SNFI Cluster, Care International launched a series of dedicated online workshops on Shelter Modalities throughout December 2020. These workshops engaged 30 Shelter/NFI cluster members to learn more about the different shelter types and implementation modalities relevant and applicable to the context. The workshops also included knowledge and networking that helped cluster members to better design the shelter approach as well as improve the methods and quality of implementation programmes. Some of the key training topics included shelter types and modalities, shelter rehabilitation, collective centers, cash for shelter, cash for rent and global rental guidance, cash and market-based approaches and site improvements.

The SNFI Cluster and HNAP have conducted a household assessment on shelter conditions, especially in the place of displacement. Specifically, the following areas are explored: shelter types; settlement types; shelter damages; problems or issues reported in shelters; hazards; evictions; occupancy status and property status in the place of origin. Currently, 75 percent of IDP households live in finished houses or apartments, 11 percent in tents and 7 percent in unfinished houses or apartments. 10 percent of IDP shelters nationwide are currently damaged (not including tents or makeshift shelters) and 19 percent have been unable to make repairs on their current shelter because they can’t afford it. Lack of space inside IDP shelters is the most frequently reported problem (25 percent nationwide and 44 percent in NWS). The majority of IDP households rent their current shelter (60 percent) although a significant 26 percent are being hosted for free. Finally, 83 percent of IDP households own property in their place of origin; however, it is important to note that 74 percent of those households report that property as damaged or destroyed – only 7 percent report it intact.

Gaps in infrastructure continues to be a real concern, made worse by flood incidents. The SNFI Cluster continues to advocate for improved infrastructure implementation in IDP sites and camps. The CCCM and SNFI cluster have shared a priority list based on available information on floods reported in 2020 and are working with other clusters like ERL, WASH and Logistics cluster on an integrated approach for these required interventions. The recommended timeframe for the start of these activities would be early spring 2021 and later on, to make sure the sites have received the suitable intervention prior to winter. The planning for these interventions should consider that many self-settled IDP sites have HLP issues, that might prevent or complicate the required infrastructure improvements.

(*To note, IDPs may receive multiple services, including both shelter and NFIs; but this figure aims to reflect the unique beneficiaries reached). 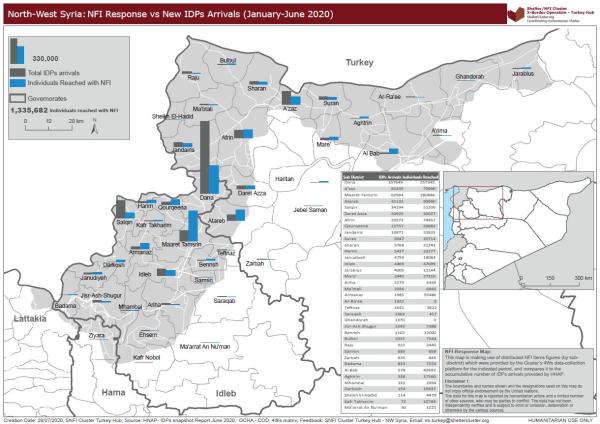