Between 2020 and 2021, the number of people in need of humanitarian assistance in north-west Syria (NWS) has increased from 2.8 to 3.4 million people. The overall humanitarian situation remains dire for 4.2 million people living in Idleb and Afrin as well as A’zaz to Jarablus areas in NWS. Humanitarian needs in NWS continue to be driven by the impacts of over a decade of hostilities exacerbated by economic deterioration and multiple displacements.

More than 2.7 million are Internally Displaced People (IDPs), many of whom are living in over-crowded locations with limited access to essential services. As of February 2021, approximately 1.7 million IDPs were living in 1,385 camps or informal sites (including 24,800 people displaced in January and February 2021 alone). Women and children represent 80 per cent of this caseload while more than 22,000 IDPs are reported to be persons with specific needs.

The expanding impact of the COVID-19 pandemic has further complicated the lives of people in humanitarian settings in NWS. As of 7 March, there were more than 21,200 confirmed cases of COVID-19: 11,560 cases in the Idleb area and 9,651 in the northern Aleppo governorate. Of these, 637 COVID-19 associated deaths were reported and 19,104 people reportedly recovered.

In early 2021, heavy rainfall and widespread flooding further increased the needs of communities in NWS. According to the CCCM Cluster, from 14 January to 3 March, more than 152,700 IDPs were affected by the flooding, with one death and three injuries reported, as well as some 27,700 tents destroyed or damaged. Many people also had food and household items damaged or destroyed during the floods. This affected at least 418 IDP sites, and access issues were reported due to the flooding. The flooding increased the need for tent replacements, non-food items (NFI), plastic sheets, multi-purpose cash assistance, ground levelling, winterization, and infrastructure improvement services.

The PIN and targets, and overall funding required, will be consolidated in line with the Humanitarian Response Plan (HRP) process which is still ongoing.

The Cluster’s response during the first quarter was particularly high due to the increase in natural hazards during the winter season, especially floods. The winterization response was another major factor, as a late winter top-up was carried in response to remaining needs in coordination with OCHA, as well as a scale-up from SCHF and ECHO.

SNFI Cluster members continue to actively respond to the needs of the newly displaced population as well as protracted IDPs in NWS. In the first quarter of 2021, more than 904,000 individuals received NFI assistance in the form of NFI kits, kitchen sets, mattresses, jerry cans, carpets, solar lamps, tarpaulin, and blankets, as well as seasonal assistance, or in the form of multi-purpose cash transfers.

Shelter needs of close to 312,000 people were addressed during the reporting period. As part of a complementarity approach, some sites and IDPs benefited from more than one SNFI activity. Of this shelter support, 40% was related to the provision of emergency shelter, 48% to the rehabilitation of infrastructure in IDP sites and 12% to shelter rehabilitation and transitional shelters.

The Cluster has been active in the coordination of the winterization response to ensure that plans were implemented in an efficient and timely manner to target close to 1.5 million people. During the winter season of 20/21, Cluster members reached over 1.6 million individuals with winterization assistance, exceeding the initial target. The main activities included distributing heating fuel, stoves and NFI kits.

The Cluster, together with IOM, published NFI Distribution Guidelines in Northwest Syria in both Arabic and English. SNFI also published a technical support document, namely Shelter Types in NWS, in both English and Arabic. Lastly, SNFI published a report on Shelter Conditions in NW Syria. 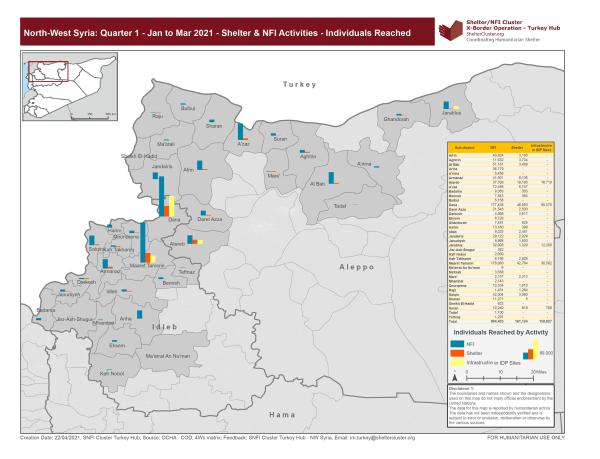