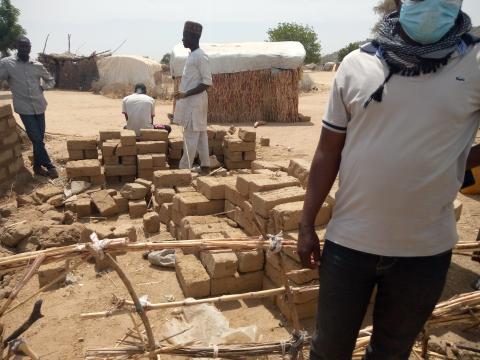 On the 17th of October 2018, the Shelter Cluster was activated for the South-West and North-West regions to support the response to the recent crisis. The cluster is led by UNHCR. while in the Far North and at the national level, UNHCR leads coordination through a sectorial approach since 2015.

Nine out of ten regions of Cameroon continue to be impacted by three complex, protracted, humanitarian crises caused by continuous violence in the Lake Chad basin and in the North-West and South-West regions and the presence of over 325,000 refugees from the Central African Republic (CAR) in the eastern regions (East, Adamawa and North).Humanitarian needs are compounded by structural development deficits and chronic vulnerabilities that further challenge the longterm recovery of affected people.

In the Far North region, particularly in the Lake Chad basin area, the economic context is marked by poverty, the lack of access to and sustainable management of natural resources, limited income-generating, and market opportunities, as well as a drastic reduction in agriculture, livestock production and touristic activities due to prevalent insecurity. Agricultural activity has come to a standstill in areas prone to repeated incursions by non-State armed groups (NSAGs) and because of environmental constraints, exacerbated by climate change and attacks by granivorous birds. Meanwhile, the agro-pastoral economy is negatively impacted by the disruption of seasonal transhumance as main border transit points with Nigeria and Chad are closed and as herders transit livestock to avoid areas affected by insecurity.

In the North-West and South-West regions, ongoing violence and regular lockdowns continue to have a major impact on the local economies. In 2021, 72 lockdown days were recorded; significantly hampering socio-economic activities and the delivery of humanitarian aid. Violence and insecurity have resulted in major displacement, affecting agricultural yields in the North-West and the abandonment of large parts of fruit, palm, and rubber plantations in the South-West. Ethnic and political tensions between farmers and herders persist. However, unlike the North-West, the South-West has maintained a certain level of economic activity.[1]

In 2022 a total of 1.2 million people are in need of a shelter and/or household basic items. As of today the sector has the capacity to assist at least 575,000 individuals through its 10 operational partners  for a total requirement of $ 13 M.